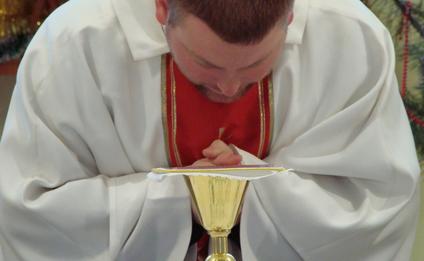 One of the most important things we do as Catholics is the celebration of the Mass.  Unfortunately, our understanding of the Mass tends to be poor.  In the early church, the Mass, called "The Breaking of the Bread" in the Book of Acts and the New Testament Letters, was celebrated in private homes.  The early church was small and was persecuted so Mass was celebrated secretly in homes.  After the conversion of Emperor Constantine in 313 A.D., Christians were no longer persecuted.  When it became the religion of the state, much larger worship spaces were needed.  As the state religion, Mass was done in Latin, the language of the people.

Over time, the Roman Empire fell and the regular people no longer spoke Latin.  Mass continued to be done in Latin as the "language of the church" and bibles were only available in Latin.  This meant that the people could not understand the words the priest said.  So, Mass became something the priest did while the people prayed devotions, like the Rosary.  Since the people did not understand Latin, bells were rung at the consecration to let the people know what was going on.

Perhaps the most visible change made by reforms the Second Vatican Council called for Mass to be said in the vernacular language (the language of the local people).  (Paragraph three of the Constitution on the Sacred Liturgy, Sacrosanctum Concilium)  Now, the people understand the words of the Mass but may be lacking in a full understanding of the Mass.

Thus, it seems appropriate to provide some basic teaching on the parts of the Mass and the meaning of those parts.  First, we should discuss the purpose of the Mass.  The Mass, as worship, is designed to give praise to God.  The "opposite" view is that we gather for Mass to make ourselves feel good.  Without question, we give praise to God in our Mass.  But I do not believe that the Mass is meant to make us feel good about ourselves all the time.  Should it make us feel good?  Yes.  However, we each have our crosses to bear and the Mass speaks differently to different people.  What speaks to one person may seem irrelevant to one person may be of the utmost importance to the next person.  Hopefully, this explanation of the Mass will help you appreciate the Mass more fully.

Active participation begins with external acts.  Thus, the congregation are called to share in the singing and the appropriate responses.  Mass is not a spectator event were the presider does everything.  The people sing.  Lectors share in the readings and altar servers assist the priest.  Our posture is part of active participation.   We stand in union, we sit as we listen, and we kneel as we offer the Eucharistic Prayer as a sign of humbling ourselves before God.  Even periods of silence are part of our active participation.  The silence is a chance for us to reflect on how God is speaking to us.

Active participation goes beyond our external acts.  As active participants we are called to attentively listen to the readings and homily and reflect upon their meaning in our lives.  We are called not to just watch as the priest presides.  As presider, the role of the priest is not to do everything himself.  Rather, the priest as presider leads the people as they offer their worship.

Introductory Rites - The introductory rites are not just something we do to get the Mass started.  The gathering rites, beginning with the procession and opening hymn are meant to draw us together as a community and to open ourselves to the spirit.  The GIRM says the gathering hymn's primary purpose is to draw us into unity.  We must be welcoming to each person, friend or stranger to have unity.

Liturgy of the Word

Liturgy of the Eucharist (Video - "So What's on the Altar?")

Concluding Rites - The concluding rites include the final blessing, the dismissal (The Mass is ended, go in peace), the kissing of the altar by the priest and deacon and the recessional.  We go out into the world to love and serve the Lord.

For videos on the Mass and items we see in Church: