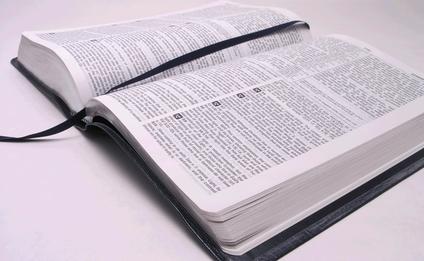 Traditionally, Catholicism has been misinterpreted as failing to put enough importance on the Bible.  Catholics have been seen as knowing nothing about the Bible. Our Protestant brothers and sisters tend to have much better knowledge of the Sacred Scriptures.  Catholics should and do value the Bible as foundational to our faith.  The difference with our Protestant brothers and sisters is that we also value the importance of Tradition.  Tradition in this sense does not mean specific customs and rituals but rather the ongoing developing doctrines and understandings of Scripture that have arisen over time.

That being said, we, as Catholics, need to grow in our understanding of the Bible and all it has to offer.  The Bible is foundational to our faith.  It tells the story of God's people throughout time (Salvation History), the teachings of God including the Law and the Ten Commandments, and the ministry and teachings of Jesus Christ, the Son of God.  It gives us insight into how the biblical writers saw the presence of God in the lives of the people and their own lives.

Thus, the Bible is of immense important for those who seek to have a personal relationship with Jesus.

Inspiration of the Bible
For centuries the Bible was understood as dictated word for word by God, written by human hands.  This was what was meant by inspiration.  The difficultly here is how do resolve differences between scripture passages, scripture and documented history, or scripture and science (cf. Evolution).  We still hold that the Bible is inspired by God.  However, our understanding of how scripture is inspired has changed.  By inspiration, we now mean that God inspired the human author with the concepts and ideas but allowed the authors to choose their own words based on their cultural understanding of the bible.

Authorship of the Bible
For centuries, each book of the Bible was believed to have been written by the biblical character that it is named after (with the Pentateuch understood to be written by Moses).  Responsible scholarly study  now understands this is not always the case.  For instance, we now know that the Pentateuch, once attributed to Moses was not written till centuries after his death.  This DOES NOT mean we believe that Moses had nothing to do with the Pentateuch or lead us to think the stories are made up.  Oral Tradition was very important for the Israelites.  The stories of the Pentateuch were handed down for generations orally and, of course, whoever wrote the various books did so under the inspiration of the Holy Spirit.

The same can be said for the New Testament.  Many of the Letters of Paul were written by him but not all.  Three of the gospels were likely not written by the apostle whose name they bear.  Luke is understood to be written by Luke himself but he was not a direct apostle of Jesus.  He joined the Christian faith after the Resurrection, likely under Paul's influence.  The gospels were not written until thirty or more years after the Resurrection.  Mark is understood to be written between 60-70 A.D., Matthew and Luke between 70 and 90 A.D. and John around 100 A.D.  This does not mean the gospels could not have been written by the original apostles themselves but giving the time frame, it is more likely that members founded by each of the Apostles wrote the gospels attributed to them.

This should in no way devalue the Bible.  In fact, in the time of the biblical authors, it was considered a sign of honor to name a book after a person.  For an understanding of who wrote a particular book of the Bible consult a good commentary or if your Bible has an introduction to each book of the Bible, it probably includes some discussion of who wrote the book.

Why are there so many translations into English?  As was discussed above, there has been a great increase in biblical scholarship in the last century.  This has led to different interpretations and translations.  Most of the original Old Testament was written in Hebrew (some Greek) while the New Testament was written in Greek.  Around the third century A.D., St. Jerome translated the Bible into Latin and this became known as the Vulgate.  Translations into local languages became common during the Protestant Reformation.  The official Catholic translation remained as Latin until the 20th Century. The many different translations reflect different understandings.  The translations listed above are all considered as literal translations, meaning they attempt to translate the original scripture as closely as possible.  Other translations paraphrase the texts, attempting to modernize the text.  It is good to help people understand what the original text means today but it is another to paraphrase the text without allowing the reader to see the original texts for themselves.

Commentaries and Bible Dictionaries
Given everything said above, it becomes necessary to have reference material to help people understand the Bible.  Two important types of reference material for scripture study are commentaries and biblical dictionaries.  Commentaries are books that help us understand what the original authors of the passages meant and what it means for us today.  Biblical dictionaries take key words found in the Bible and explain the origin of the term and its use in various books of the Bible.  Perhaps the most common Catholic commentary is The New Jerome Biblical Commentary.  In one volume, it offers a concise summary of all the books of the Bible.  However, it can be a bit technical to read.

In this book he lays out five models for how we understand revelation.

In reality, no one of these models can totally explain our view of Revelation and the Bible.  We are called to understand that the Bible does indeed include instructions (doctrine) from God, it tells the history of God in the world, speaks of how people have experienced God in their lives, and calls us to look beyond the "physical details" and transcend to the spiritual of what all these means for us.

This short introduction does not do justice to Dulles' Models of Revelation but I hope it helps you to think about how you view the Bible and revelation.

"'Assemble the people for me; I will have them hear my words, that they may learn to fear me as long as they live in the land and may so teach their children.'" Deuteronomy 4:10